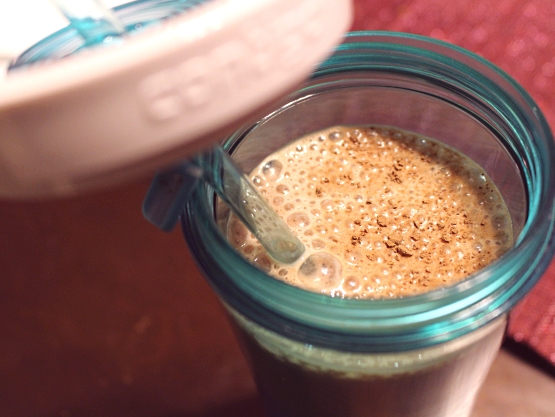 Here’s yet another concoction I’ve come up with in the past few days having to do with protein. I know what you guys are thinking, “What’s with all the protein, man?!”

Well, to be honest, I was diagnosed with a heart infection right before I started this blog. The pinnacle of health, right? Why should you be following someone’s health blog when they have/had a heart infection?

It wasn’t my fault, I swear. I just happened to get a fever when I was camping last August and it went a little too deep for comfort. Probably started with strep bacteria because my throat was mighty sore at the time. Believe it or not, heart infections are actually somewhat common in people my age (I am 23). I felt a little bit of chest pain starting in October … nothing major, just a bit of burning. Kind of like acid reflux but a bit to the left. Went to the doctor in January when it wouldn’t go away, and BOOM, pericarditis.

Did you know that your body usually goes for muscle first if you’re an active or dieting individual? I mean, active enough that carbs don’t even have a chance. What muscle does the body like to choose, of all things? The heart muscle. And because my habit of staying healthy includes running 3 miles a day and eating in moderation, I figured it would be best to up the protein just in case my body decides to have a little snack on my ticker.

However, if you ever get something wrong with your heart, I highly, highly suggest you go see a doctor. That’s not something to be screwing around with. The only reason I am is because I was directed to take that much advil a day, and my test results came back completely normal, so it’s likely just a very mild infection. Even my thyroid was normal, which is unusual, because it’s autoimmune (I know, I’m sooo healthy, right? That one is hereditary, though!). Only 1 in 3 people experience spontaneous thyroid remission. I guess I have good gambling odds.

Anyhoo, in order to force more protein into myself (my macros are about 35% fat/ 35% carbs/ 30% protein right now, it is recommended that active individuals looking to burn fat/maintain muscle eat between 20 – 40% fat, 20 – 40% carbs, and 30 – 50% protein), I’ve been tinkering around with a bunch of recipes involving protein powder. I even just had a whole stash mailed to me from bodybuilding.ca so I can find the best vanilla flavour ever (even though I did find a pretty good one from Superstore in the meantime, the Vanilla Whey Isolate – PC brand). But I’m not sure what to do with vanilla (yet!), so on with the chocolate! 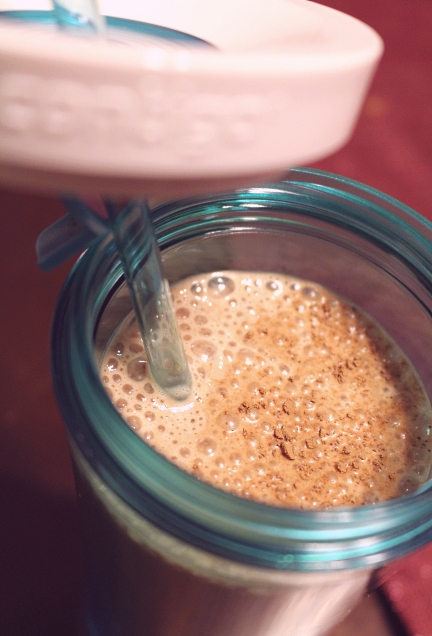 There are a lot of health food websites and blogs out there these days, and with that comes both new information and misinformation. Short of realizing that some of these folk are commanding death threats towards corporations such as Starbucks and Monsanto, how exactly do you tell?

1. Threats. If you have to threaten someone to get your point across; that is extortion, not information. If somebody disagrees with you (and decides to, say, vaccinate their children or something) and you feel the need to threaten them or wish harm upon them or their child, that is disordered thinking. You might want to re-check your sources and get a level head before going onward with your debate. It is good to be passionate about something; but being passionate to the point of irrationally threatening someone is beyond healthy, and unfortunately, all too common on the internet in this day and age.

2. Cult-ism. Now, in extreme cases, cult-ism and threats tie together. If somebody decides to stop eating vegan or vegetarian, for example, and someone begins wishing death upon them, that is cult-ism, and the perpetrator is likely feeling threatened that the ‘offending party’ is leaving their ‘group’ or ‘niche’, and thus begins to threaten them. However, this is an extreme example. You may see this happening in politics all the time (people threatening those who are liberals, conservatives, pro-choice, etc.). Does that mean politics are a bunch of tiny cults? Well, maybe.

3. Fear-mongering. When you come out of any website feeling frightened about food or medicine, that is because of fear manipulation, not education. When you are educated about something, you may feel inclined to change your point of view on something. However, when someone is trying to guilt you (a.k.a. threatening that vaccines will give your child autism) when there is no evidence for it, then they are trying to strike fear into your heart to manipulate your point of view.

There are indeed realistic things to be afraid of (such as inactivity causing risk of heart disease); but you will find these things in studies, not a blog or news article willing to manipulate data for hits.

4. Lack of critical thinking. As mentioned in #3, sometimes people claim stuff without a lot of thought behind it. When you see a health article or blog that says something to the extent of, “Artificial sweeteners are bad bad bad bad!” without any studies or proof linked to it, then there is no reason for it to be taken seriously. A good example of this is the ‘gluten sensitive’ fallacy. Many health-food pages will gladly link you to a list of 100 or more ‘symptoms’ of gluten sensitivity .. however, there is often no proof that any of these symptoms are actually linked to dietary sensitivity. This can lead to a lot of people going on a gluten-free diet for no reason at all which can actually be unhealthy for you (and reading the comments on that article, it seems to circle right back to ‘cult status’ argument). Don’t get me wrong, I’m not discrediting the existence of gluten-sensitivity and celiac disease, or the benefits of reducing refined grains .. I’m merely pointing out that if someone tries to ‘diagnose’ you online, there is no way to be certain you actually have it.

5. Exaggeration. I’m sure you’ve seen this one happen before. One study gets published, and then the entire scientific, news-journalism, and blogosphere blows up about it. This can be both good — say the study has merit and free press leads to donations that can aid further research. Or it can be bad, in the case of the single study that came out linking vaccines to autism; which people still believe 16 years later.

6. Buzz-words. When a website, blog, or product promises that you’ll lose 10lbs in 3 days, or that it’s a ‘secret your _____ (doctor, dermatologist, etc.) doesn’t want you to know about’, or uses the word ‘miracle’ too many times — they’re trying to sell a product to you, not educate you. In real, non-biased studies, you’ll find that those words hardly ever appear. Because the physical, chemical, and hormonal make-up of each individual person can vary so dramatically, it is often unlikely you will get the exact same results as someone else. You might get similar results to someone who has similar traits as you — similar weight, activity level, body fat content, muscle mass, etc. — but there is no guarantee. You might think there’s no harm in trying, but then again ..

7. Lying. One of my favourite comic book characters is the ‘lying cat’ in the comic book series ‘Saga’. It meowls out the word ‘lying’ whenever someone is, well, lying. Sadly, the lying cat doesn’t actually exist, so there are still a lot of people who lie. Especially about things that may or may not be good for you. For some, lying is a harsh word, and they are simply misinformed. For others, they are blatantly lying, they know it, and they keep lying. This is often revealed by the overuse of buzz-words, lack of evidence, exaggeration, fear mongering, and hiding of information. How can you tell someone is lying? Well, you can’t. However, Google Scholar contains a search bar for many studies about people’s claims these days. How can you tell someone on Google Scholar is lying? It’s a trademarked, company-funded study for a product, with lots of buzz-words calling it a ‘miracle’. That, or the control/sample size is very small, while the claims are very big. This isn’t a sure-fire way to tell if someone is lying or not. However, it’s better to try to find the evidence to back up their claims, than to believe absolutely everything you see or hear (imagine if people went around believing absolutely everything that happens in ‘Weekly World News’! You remember that paper, don’t you? The one that claimed the existence of ‘bat-boy’?). At least then you can learn something new in the meantime, and be better educated for the next time it happens.

There are a few other things I have left out, such as labelling (calling things ‘Big Pharma’ or ‘Monsatan’ in order to try to stir up fear or hatred of a corporation or company), and paranoia (believing that every streak in the sky is a ‘chemtrail’, for example) — but those things are both blatantly obvious, and another conspiracy theory, for another time. I hope that you have learned things from this post, and while somewhat controversial, that you will stay with me to learn more things in the future. Oh yeah, by the way — do not be scared to be critical about my blog, too. In a conductive manner, that is. If you’re going to spit poison saying that gluten and vaccines have killed your family and that I’m the devil .. I will probably be sad, but those are things I have heard before, and have enough evidence not to believe. However, if you kindly link me to another study that has any of the following: large sample size, is not on a biased website or one that can’t have certain valid credibility like ‘natural news’, youtube, or a Facebook meme; and is placebo-controlled, peer-reviewed, or double-blind .. then I will probably be more inclined to believe you, and will likely enjoy friendly debate if any happens to ensue.

Until next time, internet friends!